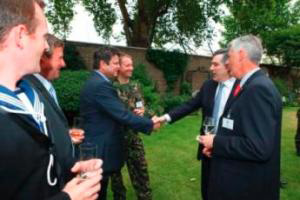 Prime Minister, Gordon Brown has paid tribute to members of the Reserve Forces and employers from across the South West, thanking them for the valuable contribution they have made and continue to make to the UK's Armed Forces.

Representing the region at a Downing Street reception was Sergeant Brian Parsons of 6 Rifles who works for Coles Miller Solicitors LLP based in Poole. He was accompanied to the reception by his employer, Adrian Cormack, a Partner at the firm, who encouraged and supported him during mobilisations to Iraq in 2004 and Afghanistan in 2008.

The other employers from the South West who were selected to attend the reception were Alf Blackman, a building contractor from Holsworthy in Devon and Neill Fullick, a Training Team Manager at Augusta Westland in Yeovil. Alf employs Scott Healy, an Able Seaman in the Royal Naval Reserve who served in the Middle East last year and Neil employs Kevin Pinnell, a Sergeant Major in the Territorial Army who has served in Iraq.

Speaking at the reception, which was held on Uniform to Work Day and the day before the first national Armed Forces Day, the Prime Minister said, "I don't think we thank people enough and therefore today we do want to thank you personally and individually as employers for what you do and also to thank all the brave and courageous reservists who have most recently had periods of service in some of the most dangerous parts of the world, in Iraq and Afghanistan."

Sergeant Brian Parsons who is a Personal Injury Executive specialising in road traffic litigation said: "My employer was incredibly supportive when I was mobilised to Iraq in 2004 and again to Afghanistan last year. I'm very grateful to Adrian and the reception is an ideal way to say thank you."

Adrian Cormack, Partner at Coles Miller Solicitors LLP, said: "We have always encouraged and supported Brian's involvement in the TA knowing the benefits employing a Reservist can bring and acknowledging the important work that Reservists are sent to do."

Tim Corry, the Director of SaBRE (Supporting Britain's Reservists and Employers), who organised the reception, said, "When a Reservist is mobilised, knowing they have the genuine support of their employer is extremely important. However, we recognise that at times this can be a challenge for the employer, who has to balance this support with business demands. To help with this, there is a considerable amount of advice and support available which employers can easily access through regionally-based SaBRE representatives."

There are around 34,000 members of the Reserve Forces - of which the majority are in the Territorial Army, with the remainder split between the Royal Navy Reserve, Royal Marine Reserve and Royal Auxiliary Air Force. Since January 2003 over 17,000 Reservists have been mobilised for full time active service, mainly in Iraq and Afghanistan.