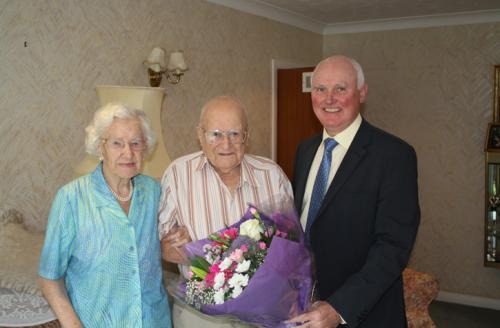 Business leaders will be gathering at a memorial service to pay their respects to Coles Miller Solicitors founder Howard Cole who died on June 12.

The memorial service of thanksgiving to honour his life and achievements will be held at 2.30pm on Sunday July 12 at Broadstone Methodist Church.

In 1954 Mr Cole founded his own firm HFJ Cole and was joined soon afterwards by his brother Arthur. At that time the firm was based in the High Street, Poole.

By 1972 the firm had three Partners - Howard Cole, Arthur Cole and Roger Senior - and had been renamed HFJ & AW Cole.

Coles Miller grew significantly over the next quarter of a century, merging with two Bournemouth firms: Charminster-based Mills Bushnell in 1992 and DTW Solicitors (formerly Derek T Wilkinson) on the East Cliff in 2007.

Three years ago Mr Cole and his wife Betty celebrated their 70th wedding anniversary. They had met at Broadstone Methodist Church in their teens.

Mr Cole  is survived by his widow Betty, their three children Susanne, Rosemary and Andrew, their five grandchildren and four great grandchildren.

If you wish to attend the memorial service, please confirm attendance with the Coles Miller Marketing Department, 01202 673011.