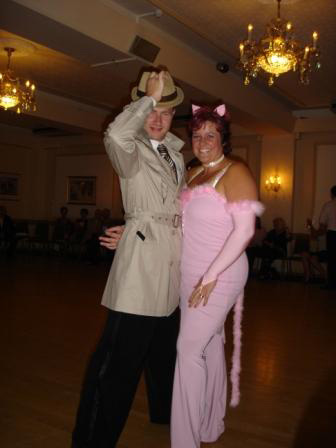 Coles Miller's own superwoman, Partner Ruth Kerley, has completed four challenges in the space of a month to raise thousands of pounds for charity. The challenges requiring endurance, dedication and nerves of steel.

To start off Ruth took part in the Poole Festival or Running on 12th June, running 5 kilometers around Poole Park. She followed this with the Race for Life completing it both in Bournemouth on 19 June and Poole on 26th June along with other members of staff from the firm.

Adding to the blisters, Ruth had all the while been practicing hard with her professional dance partner, Nick Jury, from Dance Crazy for the Dorset Business Come Dancing Competition held at the Hotel Piccadilly on 30th June. She competed with six other local business people in the dance off similar to TV's Strictly Come Dancing competition. This was the second year Dorset Business had held the contest and Ruth's practice paid off, and she came runner up with her Pink Panther and Inspector Clouseau interpretation of the salsa, with a flawless routine.

In total Ruth raised over £2000 for the various charities, all of which were cancer related.

Not many people would embark on such a challenge in the space of a month. Ruth is now looking forward to putting her feet up!